Eminent sports journalist Moti Nandy was also an eminent Bengali novelist who was popular among readers of all ages. His most famous fictional character was the swimmer “Kony” on which even a national award winning film was made.

Yet Moti Nandy did not write any sequel to Kony. Instead, he made of series of novels on another female character named Kalabati. She hailed from a family of ex-zamindars of a settlement named Atghara. Nearby was Bakdighi where another family of ex-zamindar resided. The stories of Kalabati were based on the characters of these two villages. In the first story, Kalabati participates in disguise in an all boys cricket match between the two settlements and wins the match for her team. This was long before the film “Dil Bole Hadippa” featuring Rani Mukherjee starred was released and one wonders if the film was inspired by the story.

I had no idea that there were actually two villages of almost similar names which inspired Moti Nandy to create the background of his story.  I realized it when one fine morning I reached the nondescript town of Dasghara in Hooghly district. Located at a distance of 13 km from the pilgrim town of Tarakeshwar, Dasghara is famous for the victorian mansions and deeds of Biswas family who was once zamindars of the area.

From the members of Biswas family, I came to know that Moti Nandy used to visit their residence. I was also informed of another nearby settlement named Chakdighi which also has a mansion named as Baganbati belonging to Sinha-Roy family.

A bus ride from Tarakeswar station took me to Dasghara in about 20 minutes. I got down at Dasghara Bazar and took a brisk walk to reach Biswaspara, my first destination at Dasghara. As I entered Biswaspara, the first thing which caught my attention was a fusion architecture mansion on the banks of a water body. There was a white octagonal Rasmancha on its left and a nondescript Aatchala Shiva temple on its right. Walking on the dusty road beside the pond named Gopisagar, I crossed another building which was earlier the Nahabatkhana.

The victorian styled mansion used to be the Kachari house of the Biswas family. Like many other zamindar families, this mansion also has a coat of arms on its top. Interestingly the coat of arms consists of three horses, instead of lions.  There is similar three horses coat of arms at Burdwan Rajbari, which is now Burdwan University.

The adjacent building was the Baithak Khana. Now I noticed a small Dolmancha besides the house with some terracotta carvings on it. In the interiors of the Kachari, there is beautiful Nat Mandir with several pillars . The mansions are well maintained. 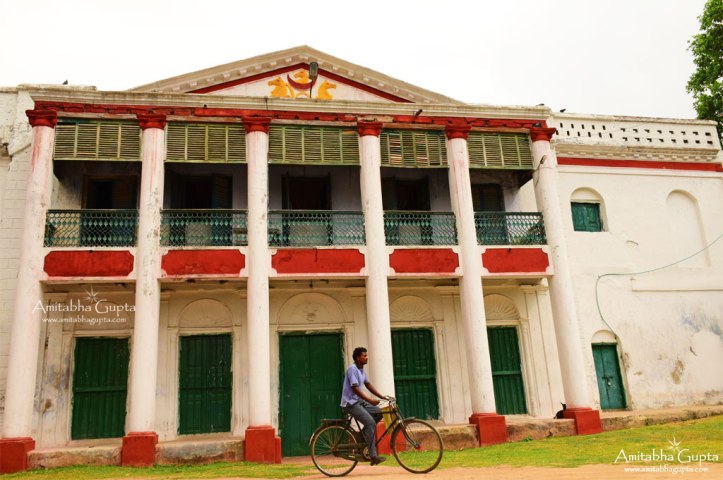 Walking  straight down the pathway between the Baithak khana and Nahabatkhana, I entered a lane dotted with betel nut trees. There are many memorial stones beside the pathway which has names of ancestors of Biswas family engraved on them. Walking down this path especially when it is cloudy, gives a sense of melancholy. This path leads to the residential mansion of the Biswas family and a temple housing the family deity.

The star attraction of the place is this five pinnacled Gopinath temple. The temple has exquisite terracotta plaques on its three sides and is relatively well maintained. The wall facing the adjacent Durgadalan has abundant plaques while two other walls have little to display. The central arch shows the battle of Ramayana in details. The right arch also has scenes of Ramayana, where the prominent plaque is that of a giant Kumbhakarna devouring monkeys.  The left arch also shows scenes of Ramayana, but most of plaque  of this arch are damaged by the vagaries of time. Out of prominent  plaques of this arch there is a scenario of Suprasha bird attacking Ravana’s chariot. Suparsha is a mythical bird found only in Krittibas’s Ramayana. He attacked Ravana’s chariot soon after Ravana had badly injured Jatayu who later succumbed to death. Suparsha was not aware of Jatayu’s fate, and he had let Ravana go after the later pleaded him for mercy as the giant bird was about to engulf Ravana along with his chariot.

Among the terracotta panels ,you get to see rare scenarios from Mahabharata, Goddess Saraswati with veena, Lord Shiva playing tanpura, cChariots, hunting scenes, several scenarios from Krishnalila. With the passing of the time, like many other terracotta temples, many of the plaques are getting eroded. In this temple, some plaques were replaced at a later period, which can be easily spotted. Maybe they are also 100 years old, but still in a better condition.

The settlement of Dasghara was founded by Jagmohan Biswas, who migrated from Orissa in the 18th Century. He was the founder of the Biswas family at Biswaspara, whose descendant Sadananda Biswas built up the Gopinath temple in 1729.  The family is known till date for their philanthropic activities. Opposite to the temple is the Biswas family residential house. The Durga Puja of the Biswas family is 400 years and is celebrated till date with great pomp and show at the Kacharibari. The family also celebrates Ratha Yatra, which is quite famous. The family members residing there are very hospitable.

I headed back to the main road and after a few minutes of brisk walking, I came across a huge Victorian styled gateway with an octagonal clock tower adjacent to it. The gateway has beautiful pillars and two lions statues on it along with other figures. The clock tower has a statue of a European styled maiden statue on it. It has four clocks; all non-functional.

The gateway is the handiwork of the other noted personalities of Dasghara – Bipinkrishna Roy  alias Beepin Kristo Roy (1851-1911), who was a Stevedore at the Calcutta port. He had also built up a huge mansion with a  picturesque colonial garden adjacent to the clock tower. Only a portion of the mansion remains where there is a post office. On the backside of the mansion, there used to a garden with statues.  The colonial garden is in a rather run-down state. There still exists a gate with lion statue and some other marble statues can be found in the garden.

A boulevard beside the mansion takes you to the Roypara. Bipinkrishna Roy had also built up a charitable dispensary, which was just opposite to his mansion on the other side of the boulevard. There still exists stone plaques on the original gate of the dispensary and the run down dispensary. A new charitable dispensary exists beside it which is still functional.

Walking down the boulevard, i came across another mansion sitting pretty beside a huge waterbody.  On its entrance, there still exists an old signage  which mentions that District Magistrate Mr. F.B. Bradley Birt first occupied this Bungalow way back in 1915.  Actually, this mansion was also built by Bipinkrishna for Mr. Bradley Birt and later for other Englishmen to stay.

Taking a right turn from the Bungalow, I came across a Rasmancha with European floral & figure designs on its wall. The Rasmancha intact inside an enclosure.  In the wall of the enclosure, there still exists some stucco human figures along with the name of Bipinkrishna Roy.

Tracing back from Roypara , I also located the towering temple built  by Bipinkrishna Roy. The temple is located on the outskirts of the clock tower. However, the temple has been drastically modernized which has robbed its old world charm.

From Dasghara, there is local transportation to take you to the village of Chakdighi. which is located within the district of Burdwan. The Baganbati is a 350-year-old huge kachari house built by French architects.  At present, it is in a rather run-down condition and it seems that it has not seen fresh paint for a long time. There is a residential mansion too which is strangely adjacent to the stables. A  Durga Dalan can be seen inside the premises along with a totally broken down library room. Chakdighi Baganbati was Satyajit Roy’s shooting location in his film “Ghare Baire”.

The Sinha Roys were actually Rajputs who came to Bengal with Man Singh as part of Dus Hazari Mansabdars and then stayed back to grow into wealthy zamindars. The mansion remains closed throughout the year and visitors are not welcome except during Durga Puja. I was told by a rather unfriendly caretaker that family members usually visit only during the Pujas.

The most famous descendant of Sinha Roy family was Sarada Prasad Singha Roy. He was associated with Pandit Iswar Chandra Vidyasagar, who often visited the premises. The family had done lots of philanthropic work in the area. Chakdighi has plenty of old brick temples as well.

Time has taken its toll on these two historical settlements but there is still enough evidence to remind everyone about their glorious past.

1. Amit Ghosal, Kanad Sanyal, Lokendranath Roychowdhury, Sagar Sen and Deepanjan Ghosh
for accompanying me to my multiple trips to Dasghara and Chakdighi

2. Rangan Datta and Kanad Sanyal for guidance on various information on Dasghara

This site uses Akismet to reduce spam. Learn how your comment data is processed.

Visitors of My Blog